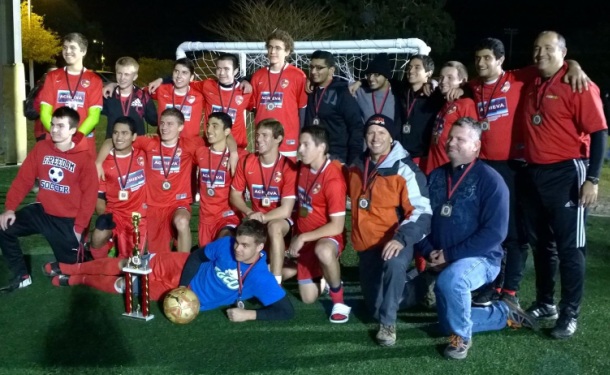 TAMPA, Fla. - Congratulations to our Chargers U19 Boys TARSA team, coached by Pablo Oyarce and Shawn Fox, for winning the 18th Annual Gasparilla Cup title. The Chargers played outstanding defense and only allowed one goal during the tournament, which allowed them to finished with an undefeated record of 3-0-1. The first game on Saturday was a tough match against TBU and the Chargers were ahead 1-0 after a goal by Leonard Lokey, but could not hold the lead as TBU found the equalizer with minutes remaining in the match to produce a final score of 1-1. The Chargers let a victory slip away, but the players were determined not to let that happen again.

Game 2 on Saturday was another tough match against the East Pasco Youth Soccer Storm (the eventual runners-up) that ended with a 2-0 victory thanks to goals from Yazan Mansour and Majde Bahloul. There were many highlights in the game, including a spectacular save by Chargers keeper Ryan Christian on a penalty kick.

The Chargers opened Sunday with a 5-0 win against West Pasco FC, setting up a meeting with the West Florida Flames and a chance to capture the title. The game was tense without many scoring opportunities for either team during the first half. The same script was followed during the second half until about 20 minutes remained and the Chargers raised the pressure. Finally, one of the team's crosses found Chad Fox, who scored on a textbook header for a 1-0 lead.

The insurance goal came a few minutes later thanks to Majde Bahloul’s left foot, which gave the team a 2-0 victory and the U19 Boys Gasparilla Cup Championship for 2014.