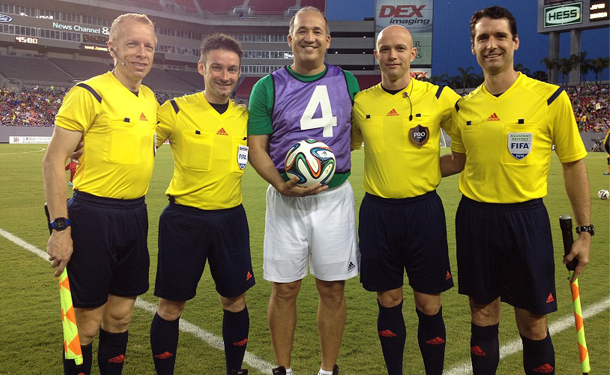 The National Soccer Team from Japan chose the Tampa Bay area to tune up and get ready for their Group Stage World Cup 2014 games in Brazil. Their last two (2) International Friendly games leading to the games in Brazil were played at the Raymond James Stadium in Tampa on June 2, 2014 (Japan vs Costa Rica) and June 6, 2014 (Japan vs Zambia).

In each of these games, a once in a lifetime opportunity was given to many of our Chargers Soccer Players and Coaches as they were chosen as members of the volunteers team assigned to participate in each of these games which were televised in many Sports Networks around the world. Chargers Soccer Players were involved as Flag Bearers during each team’s National Anthem Ceremony as well a Ball Boys/Girls during the match. Chargers Coaches participated as Stretcher Bearers in both games. For all volunteers, it was truly a remarkable and incredible experience to participate in rehearsals, interact with players and witness firsthand the speed and level of play of world class international players such as: Keisuke Honda (AC Milan), Shinji Kagawa (Manchester United), Shinji Okazaki (Mainz 05), Eiji Kawashima (Standard Liège), Bryan Ruiz (PSV), Keylor Navas (Levante) and many others.

The Japanese Football Federation and the Tampa Bay Sports Commission were very thankful and appreciative with the dedication and commitment of all volunteers that participated from Soccer Clubs in the Tampa Bay Area. All volunteering activities went flawless as the required number of volunteers for each game arrived on time, the National Anthem Flag Ceremony was done properly as per our rehearsals, Ball Boys/Girls assignments and Stretcher Bearers duties were done properly when called into action.

All and all, a very positive experience that Chargers Players, Parents and Coaches shall cherish for many years to come.

Thanks to all Chargers Players and Coaches that represented our Chargers Soccer Club as volunteers in both of these International Friendly warm-up games leading to the World Cup 2014 games in Brazil.