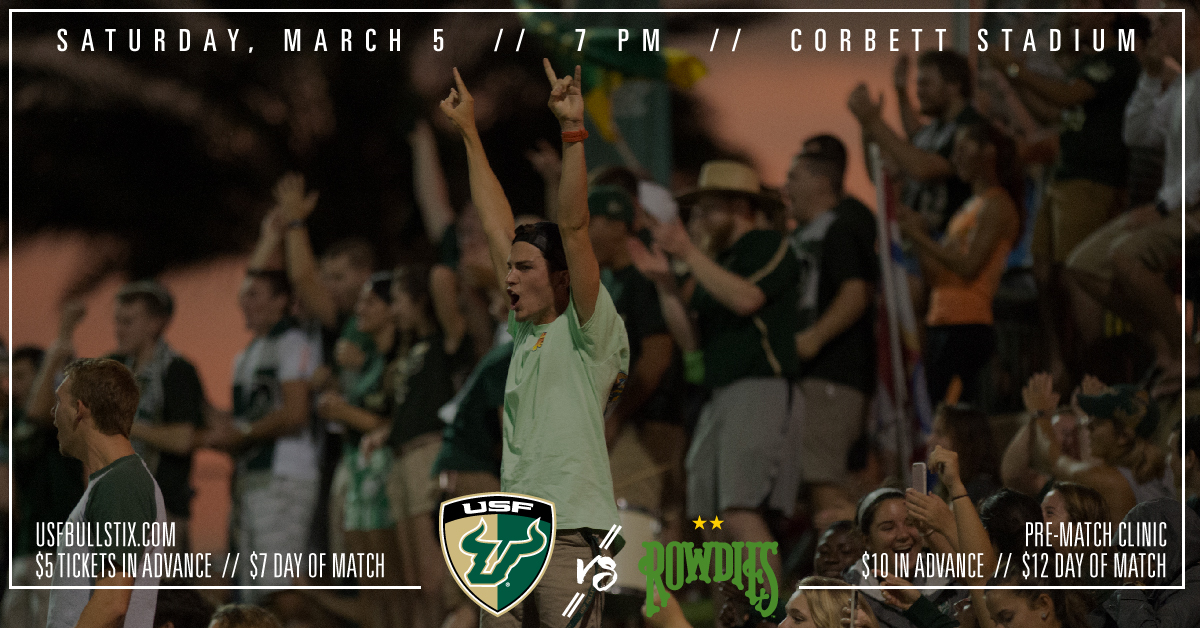 USF will play the Chicago Fire Saturday, Feb. 6 at 5 p.m. The Chicago Fire is the Bulls first match-up since the 2015 season, and the Fire will spend 10 days training on the campus of USF leading up to the start of the MLS season. Prior to the match, the Bulls will host a Youth Clinic at the soccer training field at 3:30 p.m. (check-in from 3:00-3:30 p.m.) and will feature former USF players and coaches. Clinic tickets cost $10 if purchased in advance and $12 day of game and include a ticket to the game. Participants are encouraged to register prior to the day, but walk-ups are welcome. Clinic participants are also asked to bring a soccer ball.

In March, the Bulls will play the Rowdies in their annual spring finale. USF will welcome the Rowdies to Corbett March 5 at 7 p.m. The Rowdies will join the Bulls in a Youth Clinic prior to the game at 5:30 p.m., and will also be available post game for autographs. USF will welcome back former USF great and First Team American Athletic Conference honoree Ben Sweat. Sweat played all four years for Kiefer, and was selected 14th overall by the Crew in the 2014 MLS SuperDraft. Sweat signed with the Rowdies on March 2, 2015.

For more information on either clinic, please contact Assistant Coach, Jose Robles at roblesj@usf.edu or by calling 813.974.8151.

Tickets for both games are on sale now and can be purchased HERE or by calling 813-974-3002. General admission tickets are $5 if purchased in advance and $7 day of game.

The Bulls ended the 2015 campaign in the second round of the NCAA Tournament and an 11-6-3 overall record (5-1-2 The American).  Head coach George Kiefer was named the National Soccer Coaches Association of America (NSCAA) East Region Coach of the Year and was considered for NSCAA National Coach of the Year. Kiefer led USF to its eighth NCAA tournament appearance in the past nine years and earned the No. 2 ranking in the NSCAA East Region. The Bulls posted double-digit wins for the ninth time under Kiefer in 14 seasons and went undefeated at home during the regular season.

The men’s soccer program has been one of the most successful on campus over the years, advancing to seven NCAA tournaments in the last eight seasons. The Bulls return 13 letterwinners and five starters from 2014 on top of bringing in the third-ranked signing class according to College Soccer News. They won the inaugural American Athletic Conference Championship in 2013 and head coach George Kiefer has also led the Bulls to two Elite Eight appearances and four conference/division titles in his 13 seasons as the head man. Follow the men’s soccer team on social media (Twitter | Facebook | Instagram) and visit GoUSFBulls.com for the most up-to-date information.