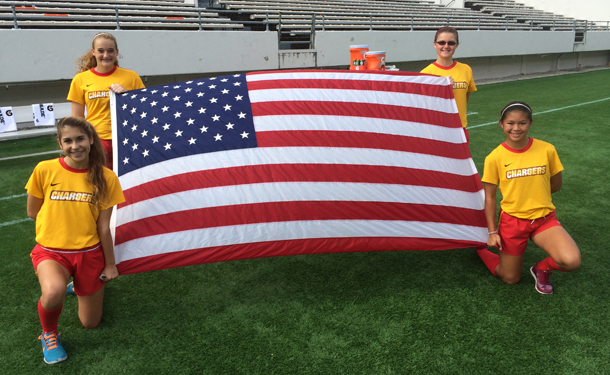 The Chargers SC were asked by U.S. Soccer to provide 14 year old Charger girls to walk out with the U.S. Women’s National Team and be the ball girls at their game in Orlando against Brazil on Sunday, 11/10/13.  They were seen walking out the FIFA, U.S. and Brazil flags before the game and as ball girls.  Several were asked to hand out U.S. Soccer handouts to spectators as they arrive for the game.  How cool is that and what a great experience for a group of our U15g Charger girls that proudly represented the club.

CLICK HERE for a photo album from that night (great photos, girls!!) It was the largest crowd to watch the USA play this year and largest home crowd since 2004 when 20,435 turned out at Arrowhead Stadium in Kansas City to watch the USA defeat Mexico 1-0 in the match after the Olympic gold medal run in Athens, Greece.

With the victory, the U.S. WNT, for just the second time in the program’s history, has posted an unbeaten record during a year that featured double-digit fixtures. The only previous occurrence was in 2006 when the USA went 18-0-4.

With 2013 now in the books, head coach Tom Sermanni’s focus next year will be toward the CONCACAF Women’s World Cup Qualifying Tournament at the end of the year as the Americans focus on earning a spot for the 2015 FIFA Women’s World Cup in Canada.