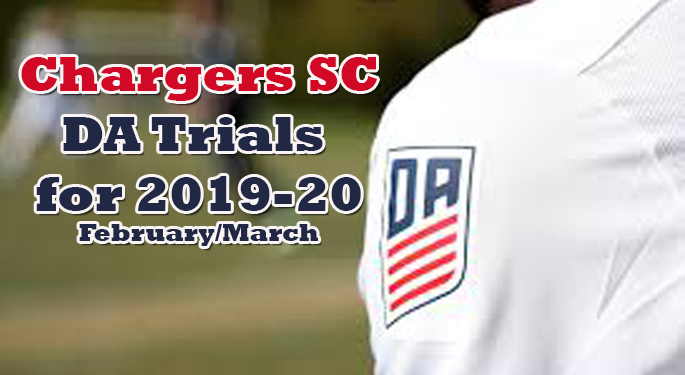 What is the DA and why is it for me?

Following a comprehensive review of elite player development in the United States and around the world, U.S. Soccer created the Development Academy in 2007. The Academy Program's philosophy is based on increased training, less total games, and more meaningful games using international rules of competition.

The Academy Program focuses on positively impacting everyday club environments to assist in maximizing youth player development across the country. The Academy values individual development of elite players over winning trophies and titles. The Academy sets the standard for elite environments for youth soccer clubs nationwide and is a part of U.S. Soccer's global leadership position in youth soccer that will impact thousands of players.

The Development Academy is the top youth soccer league in the country. With the vast majority if not all boys National Team players coming from DA clubs.

**This year US Soccer has shifted the u12 age group away from a Nationally operated league, instead encouraging DA clubs to come together to create a League that is operated by the clubs themselves, while still upholding the expectations and requirements of DA level competition.

Our teams will also be eligible to play in any tournaments or outside competition we deem fit to allow us quality competition, which is a great addition to the previous restrictions in the DA at the u12 age. The rest of our u12 program remains the same in regard to number of training sessions, philosophy, demands etc.

As the only Full U.S. Development Academy club in the Tampa Bay Area, having D.A. teams in ages 12,13,14,15,16-17 and 18-19, we are focused on creating an environment that promotes the development of future U.S. National Team, Professional and Collegiate players from the ages 12-19. We have been very successful in this goal and continue to produce many players that have reached the National Team and Professional ranks, including 6 current U.S. National Team players.

Chargers SC prides itself on providing the ideal elite environment to push players to reach their goals on and off the field.  Chargers SC has a close affiliation with AS Roma of the Serie A in Italy, to provide our top players exposure and a pathway to become part of a top club in the world. This Affiliation serves to push our environment to even higher standards, using the training methodology that is used by a top 10 team in the world in AS Roma within our Academy, while also allowing AS Roma scouts to interact with our players heavily. The last two seasons have seen 16 Charger players selected to train side by side with the AS Roma first team and train with the AS Roma Academy teams in Rome, Italy.  While, this season alone 3 of our U-19 DA players have signed professionally.

We are searching for the next great generation of players that are committed to becoming elite players and will follow in the footsteps of Charger Development Academy players such as Jeff Attinella,  started in the MLS Finals this year with the Portland Timbers, Zach MacMath, started in the MLS semi-finals last season with the Colorado Rapids, Mason Judge, signed with Eintracht Frankfurt of the Bundesliga and USA U-17 National Team, Nathan Harriel, signed Professionally with the Philadelphia Union and the USA U-19 National Team, Riley Cullum, Arber Shala,  Jacob Schick ,current Chargers DA players on the 2004 and 2001 U.S. National Teams, and many others.

If you feel that you have elite potential as a player and want to be exposed to the top level of soccer in the nation, then the Development Academy is for you. Our Charger SC Development Academy scouts are currently evaluating players for the 2019-2020 season in the age groups ranging from Birth Years 2005-2009s.  If you feel you fit the profile of a Development Academy player, please fill out the attached form and our staff will evaluate you as soon as possible.

Click the button below for the 2019-20 DA Player Trials Application (GotSoccer).

**If your son is selected for the Development Academy training, you will receive an email detailing the training locations, apparel, and further details. **