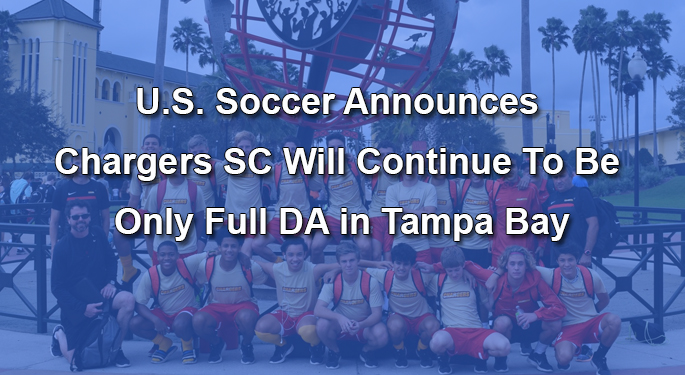 U.S. Soccer continues to expand age specific pathways for elite level players in the Development Academy.  In an effort to fill the age gap void between the U-14 and U-16 DA teams, U.S. Soccer has announced that there will be a U-15 DA age group added beginning in 2017-2018 Season.

The Chargers organization and Development Academy staff is excited about the growth and expansion of the pathway for our Chargers DA players.  On the expansion to U-15 DA, DA Coordinator Nate Bender had this to say, “There has been a gap in physical development between the U-14 and U-16 DA teams that has left many talented players out of the Academy in the past, due to physical maturation at different ages. This expansion and addition of the U-15s meets a very real need to give DA players another year to grow physically, technically, tactically and mentally before the jump to shared age groups in the U-16-17 DA teams. This will serve to strengthen the American soccer player and allow for an expanded pool of elite level players, which is only a good thing for our country as the sport grows. We look forward to bringing together the best talent in the Tampa Bay Area to compete on a National Level.”

All Full Academies were automatically awarded a U-15 DA team for this upcoming season.  Six other Junior DA clubs were selected to compete at the U-15 level as well.

U.S. Soccer Development Academy Director Jared Micklos said, “The six clubs were selected based on history of player production, cooperation with full Academy Clubs, and their alignment with the standards set by the U.S. Soccer Development Academy to develop world-class players and coaches. They will expand to U-15 Academy membership along with the 73 clubs currently part of the combined U-15/16 and U-17/18 age groups.”

We look forward to expanding National rivalries and competition at the highest level in the country for Youth Soccer.  The U-15 DA team will be for players born Jan. 1, 2003 or later.

Chargers SC Development Academy will be hosting their 1st invitational trial for the 2003 age group this Friday, January 13th from 7:30-9 pm. CLICK HERE to apply for the trial.