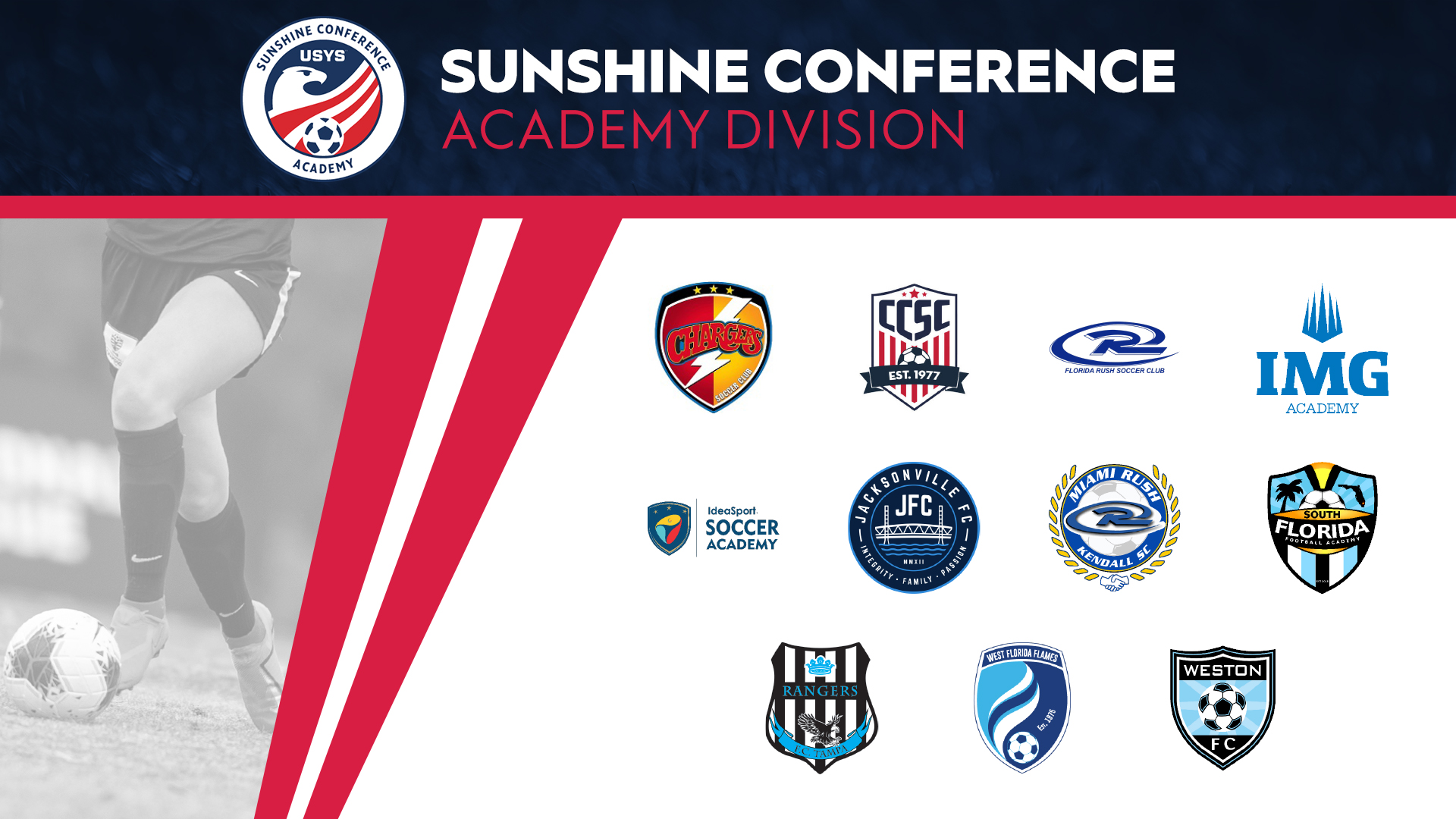 FRISCO, Texas (May 29, 2020) — US Youth Soccer is excited to announce the formation of the USYS Sunshine Conference Academy Division. The conference is partnering with several top clubs — including former Development Academy members and clubs aligned with the new MLS elite platform — who will comprise the new Academy Division.

Many of the previously established academy standards will be applied within the Academy Division, while also seeking opportunities for enhancement and potential areas for improvement.

The Sunshine Conference is one of 13 conferences within the USYS National League and serves teams primarily from Florida. Teams that compete within the Sunshine Conference Academy Division will have the opportunity to compete in the new National League Showcase Series, which provides teams with a chance to play cross-conference matches in a national setting with increased exposure to college, professional and national team scouts. The Academy Division schedule will also allow for its players to have the option to take part in outside competitions, such as high school soccer or other US Youth Soccer programs.

More details on the Sunshine Conference Academy Division will be available in the coming weeks.

What the clubs are saying…

“The Sunshine Conference Academy League is another great step in the right direction by having a direct link under the same umbrella of the Elite Youth Development for our Players to pursue a pathway to professional soccer.” - Roberto Lopez - Academy Director, Chargers SC

“I’m excited for the opportunity for our boys teams to compete in the Sunshine Conference Academy Division, wherein we will be working alongside some of the best clubs in the state of Florida in order to deliver a superior product to all those involved, both on and off the field. I look forward to watching our players grow and develop in this new environment.” - Jimmy Merritt – Boys Director of Coaching, Clay County SC - United Soccer Alliance

“Florida Rush is excited to be a part of the Sunshine Conference Academy Division. US Youth Soccer has created an excellent platform for our clubs to maintain academy standards, participate in National League Showcases, and it provides a pathway for our teams to advance in the USYS National Championship Series. This is a great opportunity for our players!” – Richie Gray, Executive Director, Florida Rush

“At IdeaSport, we’re excited to join the Sunshine Conference Academy League for the upcoming season! It’ll be great competition for our players and a chance for us to show the development of our players. Looking forward to it!” - Fernando Argila – Director of Coaching, IdeaSport Soccer Academy

"IMG Academy is proud to be a founding member of the newly formed Sunshine Conference Academy Division. This development and standards-based platform aligns with our Academy philosophy that is player-focused, coach-driven and club-led. We are excited to partner with the other Elite Florida Academies and Clubs as we strive to support the growth and development of our outstanding pool of players. IMG Academy Soccer delivers a residential ten-month holistic development program that is focused on supporting our student-athletes in their pursuit of their soccer, academic, and personal goals.” – Donald Cameron - Director of Soccer, IMG Academy

“Jacksonville FC is happy to be able to play a part in shaping the new structure of our country's youth setup. In times like these, it's very important we look at what has been the status quo and see how we can improve. The importance of having standards that directly tie into the new MLS elite youth development platform is vital to continue to grow out the player pool in this country. We hope to set the bar for other regions and states to follow.” - Pat Cannon - Executive Director, Jacksonville FC

“Through our club leaders and collaboration to create the best pathway for player development, players will compete in the best platform and environment to maximize their potential.” Renatto Soriano - Academy Director, Miami Kendall Rush

“It is a great honor and privilege for FC Tampa Rangers to compete in the Sunshine Conference Academy Division. The opportunity to be associated with the MLS Academy Program through the league and compete against some of the best clubs in Florida, is a challenge all Rangers players look forward to.” – Mike Connell - Director of Coaching, FC Tampa Rangers

“West Florida Flames is excited to be part of this newly formed MLS reserve team platform. This is a result of tremendous collaboration from a group of exceptional club leaders. The time, effort and hard work put in by Academy Directors to create an optimal environment that is in line with the MLS Elite Youth Development platform creates a higher level opportunity to support the future growth and development of our players.” – Jorge “Yoyo” Zavala – Director of Soccer/Academy Director, West Florida Flames

“Weston FC is honored to represent our region in this new era of youth soccer in the United States. We believe that this league provides players with a platform to compete at the highest level of youth soccer in this country. We are very lucky that Weston FC is participating in a league that was created and designed for this purpose.” – Luis Mendoza - Technical Director, Weston FC